The Legend of Rube Allyn

With my Nancy Drew mystery themed blog posts, it was only a matter of time before I addressed one of the most infamous unsolved mysteries in Sarasota history, the murder of Harry Higel (which leads us to the legend of Rube Allyn). 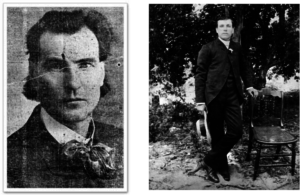 Harry Higel served as mayor of Sarasota, was a beloved local businessman, and was the person credited with the development of Sarasota Key – which he renamed Siesta Key. On January 5, 1921 Higel was found alive, but severely beaten on Beach Road on Siesta. He was discovered by a father and son who were looking for shell and taken to Dr. Halton’s office. Due to the severity of the injuries they planned to transport him to the hospital in Tampa (since there was not yet a hospital in Sarasota), but he died on the way.

The blows to the head made it unlikely that Higel was struck by a car and the fact that Higel still had his valuables ruled out a robbery. At one point a workman with whom Higel had a conflict was suspected, but then a witness claimed to have seen Rube Allyn cross the street near where Higel was found (Rube did live on Siesta). When they apprehended Allyn there was a stain on one of his shoes.

Rube Allyn’s apprehension created a mob scene that was so fierce the decision was made to detain Rube in Manatee County rather than Sarasota for his safety. Rube was in jail for 61 days in Bradentown (they still used the ‘w’ at this time) until he was declared not guilty on March 9. All evidence was circumstantial and the stain on his shoes was inspected and found not to be blood.

The Aftermath
Rube Allyn and his family moved to Ruskin (I don’t blame them). I did not find much information on him in the press after the trial, but I did find a Rube Allyn Reef in Pinellas County. Allyn passed away in October of 1947 at the age of 80. No one was ever convicted in the murder of Harry Higel. 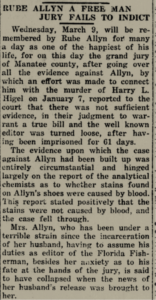 How did a man who had a stain on his shoes end up being chased by an angry mob and accused of murder?

Before the murder, Rube Allyn seemed to be a regular Sarasotan. He came to Sarasota in 1912 (or 1913) and began publishing the Sarasota Sun newspaper and then created the Florida Fisherman magazine. The local papers noted his travels, when his daughter went to nursing school, and his wife’s jam sale to raise funds for the Red Cross. He even ran for the office of state representative.

After the arrest, the Bradentown Manatee River Journal printed an article that was in strong support of Allyn. It stated, “There is not, we will be willing to take oath, a newspaper man in the state who knows Allyn, and that includes all of us, who believes he is guilty of murder.”

What I found to be most intriguing was the memorial in the Sarasota Herald Tribune after Allyn’s death. The description of Rube stated that “he wore his hair long, never wore socks, and protected his feet with canvas shoes”. This article also claimed that the Higel murder drama startled the county however, I was unable to find any mention outside of Bradenton and Tampa and even that was minimal.

Another claim in the paper after his death was that he sawed off his warehouse from the wharf one night to avoid creditors. I would assume that someone sawing off a portion of the wharf would be big news in early Sarasota, yet I was not able to find mention of this in any of the local papers at the time. I did find a mention in the 1917 City Council minutes that Rube’s building was declared to be a menace and he was ordered to remove it. Was this somehow the same story?

Obviously, I didn’t write this post in hopes of solving the mystery. But I do feel that this is an excellent example of how stories change and evolve over time. Like many legends, the character of Rube Allyn and the story of the murder have become exaggerated.

These stories are important, but it is up to us to look a little deeper and to attempt to see how and why they evolve the way that they do.

My theory (and this is only my theory) is that Rube may have simply been the somewhat eccentric new guy in town who became intertwined in the community’s grief over the loss of a beloved member and through time the community created a narrative that justified what they put him through.

But that is only my theory, what are your thoughts on the evolution of this legend?