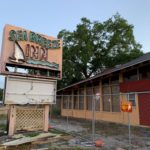 My daily commute includes the North Trail. Everyday I watch as the iconic mid-century motels meet their demise. I understand that these buildings are dilapidated, but it still hurts my history nerd heart to see them go.

I had been attempting to write a blog post to honor the era of the motels, but I was having a difficult time finding any information. And then my sister brought me the Sarasota Accommodations Directory and Guide (Guide) that she found in my parents’ basement in Indiana from their trip over 50 years ago! The history muses were definitely on my side for this one. 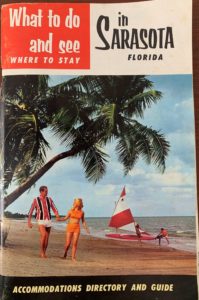 Sarasota Accommodations Directory and Guide from my parents’ basement

At this point, my sister and I become Nancy Drew and Bess (for those of you who did not read Nancy Drew, Bess was her cousin who solved mysteries with her).

We scoured the old guide and created a list of the motels by address so that they would be in order as we drove. There were 18 at that time on the North Trail. Of course, many have already been destroyed, but we did find a few that remain an ode to this bygone era. And then we decided to take some pictures to compare the 1960s advertisements to today.

In the Guide, The Golden Host had a full page color ad at the front of the book (obviously, they were a big deal). They promoted themselves as an “‘In-Town’ Resort Motor Hotel”. And, of course, they also noted their “‘Island’ Cocktail Lounge”. Thankfully, a group of awesome community members have been working to restore that lounge, The Bahi Hut, and we can all still enjoy a trip back in time – and a Mai Tai! 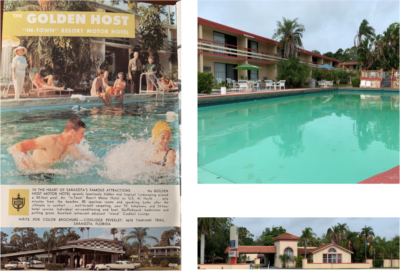 Now known as the Flamingo Inn, this motel promoted their spacious landscaped grounds and had rates that ranged from $6- $8 per day off season and up to $15 during season. For a brief moment we thought that they still had the same pool umbrella, upon closer inspection, it was a different one, but we give them credit for attempting to match it.

Even though this east of Trail motel has changed its name to the Regency Inn, it has retained its charm and was still easily recognizable (although, the hedges are much higher now). The Rainbow Motel Apartments were available by the week, month, season, or year and in large capital letters noted that it was ‘NEAR NEW COLLEGE’ which would have been brand new at the time.

It was eye opening to see how many of these motels are already gone and I know that they will continue to be razed, but I think it is important to take a moment to thank them for their place in time and contribution to this community. I can’t even begin to imagine how many people were able to experience the joy of Sarasota thanks to these accommodations.