The Secret of the Shared Headstone

Sometimes you look for a history mystery and sometimes, like in this case, the mystery finds you.

In preparing for our next presentation (History Under the Stars on July 16 – be there!), I needed a photo of Ben Stickney’s grave. This is his headstone: 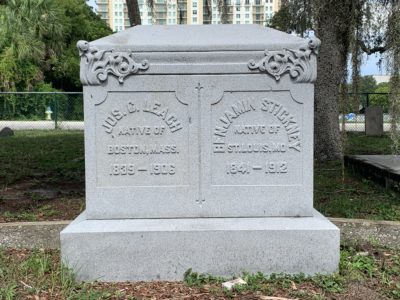 Well, that’s different. I have not seen a shared grave marker for two unrelated men before. And down the rabbit hole I fell. 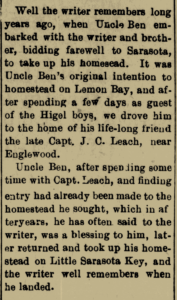 I found obituaries for both men. Ben’s obituary mentioned moving his body in the future from Rosemary Cemetery in Sarasota to his family plot in St. Louis (although I have not been able to find evidence of that move…yet). And I found a beautifully written piece after Ben’s death that mentions his friendship with Joseph.

But none of this answered the question as to why these two men share a headstone. So I began to reach out to experts, one of which was Uzi Baram, Professor of Anthropology who had conducted an archaeological study of this cemetery. Although it is something that he had pondered before, he didn’t have an immediate answer. Luckily, history buffs tend to become focused on solving these mysteries.

So there you have it. The shared headstone is a lovely tribute to friendship. Now, I cannot help but to make assumptions about the true nature of their relationship based on my present day mind and heart. The chances of solving that part of the mystery are slim, but that doesn’t matter because a tribute to friendship is always beautiful.