Don’t let the 1899 that is carved above the entrance at the Sarasota Times Building fool you. That was the founding of the newspaper, construction on this building began in 1925.

Founded in 1899 by C.V.S. and Rose Wilson, The Sarasota Times was the first newspaper in Sarasota. The Wilsons moved from the Village of Manatee where they had already established a paper to Sarasota to start a new paper in this small village. Rose continued to run the weekly paper after C.V.S’s death in 1910 until she sold it to T.J. Campell and Edward Cowles in 1923 which then in turn sold to L.D Reagin in 1924.

As Sarasota continued to boom in the 1920’s, Reagin decided to hire famed architect Dwight James Baum to design a new building for the paper. Baum completed the designs for the 3-story Mediteriannan Revival in 1925, but due to project design changes it wasn’t completed until the end of 1926. Reagin must have been extremely dedicated to his work, because he had this building built behind his home so that he was able to keep watch on the presses. 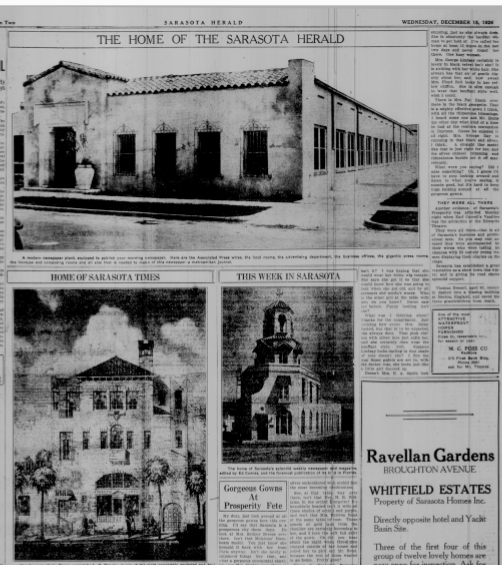 Sarasota Herald, Dec 15, 1926. Note the third floor that was planned for the Times building.

The asymmetry of this building makes me swoon. Step back some day and just look at the roofline, the three different doors, and the unmatching windows. The ornamentation that is usually at the center of the building is skewed slightly to the left. And yet, with all of the things that you would think would make a building look awkward, the Times building is breathtaking.

Dwight James Baum designed many buildings in Sarasota (notably Cà d’Zan), but personally, I think that this is his masterpiece.

The Sarasota Times closed on December 9, 1929. At that point Owen Burns (who ironically, owned the land prior to the Times) used it for his Tre-Ripe Citrus Products building (which was known for its guava jelly!). 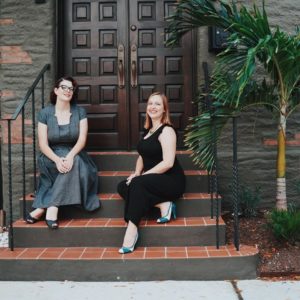 Of course Mimi and I took a publicity photo at the beautiful Sarasota Times Building.

The Times building has many different lives since 1929 and today it continues to serve the Sarasota community as Sage, a beautiful restaurant and event space.