I love learning, I love academia, and I love Collegiate Gothic Architecture – although I didn’t know that’s what it was called until I began researching Sarasota High School. 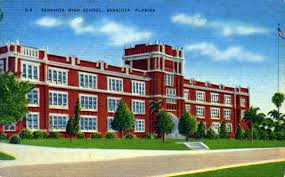 Sarasota was booming during the early 1920s which meant that the school that was built in 1913 was bursting at the seams. Collegiate Gothic style was actually fairly new at the time (although, it was meant to look old so we tend to forget that it was truly a late 19th century creation) so it makes sense that this was something that the booming city wanted to incorporate. The architect chosen for the project was Malachi Leo Elliott. Much of Ellliot’s work was in Tampa, but this was not his first Sarasota project. He had also designed 1901 Webber Street (now Southside Elementary) and the First National Bank (now the Orange Blossom) on the corner of Main and Palm.

On September 6, 1927 750 students began their year in this magnificent building. The Sarasota Herald referred to the building as “as modern and complete as money and brains could make it.” One of the unique new features – steel lockers for each student!

Today this building is on the brink of a beautiful adaptive reuse and you all know that I am going to be knocking on those doors to get in when it reopens as the Sarasota Art Museum! 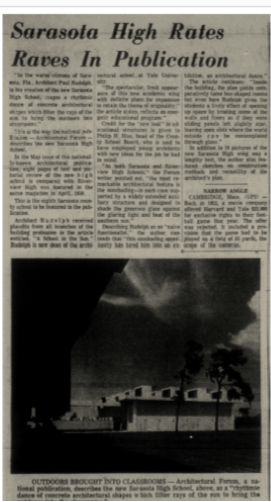 In the 1950’s and 1960’s Sarasota was one of the centers of the modern architectural movement, known as the Sarasota School of Architecture. This was not an actual institution, simply an alignment of stars that brought many innovative and respected architects to the area. So it is not surprising that when Sarasota decided the time had come for a new high school, they selected architect Paul Rudolph. Rudolph’s style is not even close to collegiate gothic! Personally, I always appreciate when a new building or addition has its own style and doesn’t try to mimic the old. I also love the fact that once again Sarasota was open to a new style of architecture for their high school.

Interestingly, I had a hard time finding articles from the time referring to anything about the school part of the school. It took quite a while for me to figure out when the first class started at this school and the only thing that I found about the classrooms and academic amenities were some references to the fact that acoustics had not been considered and they had to hire specialists from Boston to fix the band and choir rooms.

What I did find were several articles referring to the national press that Sarasota High School was receiving thanks to Paul Rudolph. This is an aesthetically pleasing building, even if it is not your personal style it is interesting, and I appreciate it for that. But the more I researched the process, the more I wondered if this was a well executed public relations project. 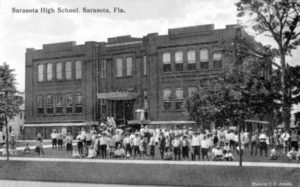 This one is definitely cheating, but I am on a roll here. This building is no longer standing, but I want to use this as a reminder of the importance of salvaging buildings if they need to be razed. 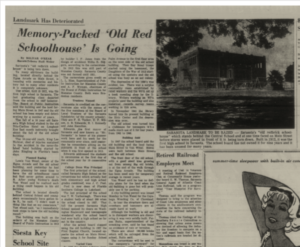 This red brick building was no longer used as a school, after the move in 1927, but it did see many lives through the next 30 years serving as the library, a space for Sunday School and the Boy Scouts, and even as a workspace during the WPA (Works Progress Administration). But alas, in 1958 the decision was made to raze the building.

However, someone had some foresight, at the end of the article in the Sarasota Herald they mention that they plan to salvage 180,000 bricks. In 1961 those bricks were given a new life at Sarasota Jungle Gardens as pathways and walls.

Since I have cheated like crazy on this post, here is a picture of the Sarasota School House prior to the 1912-13 building. Consider it a “History of Sarasota School Buildings” bonus! 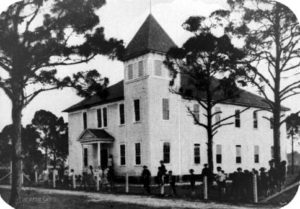