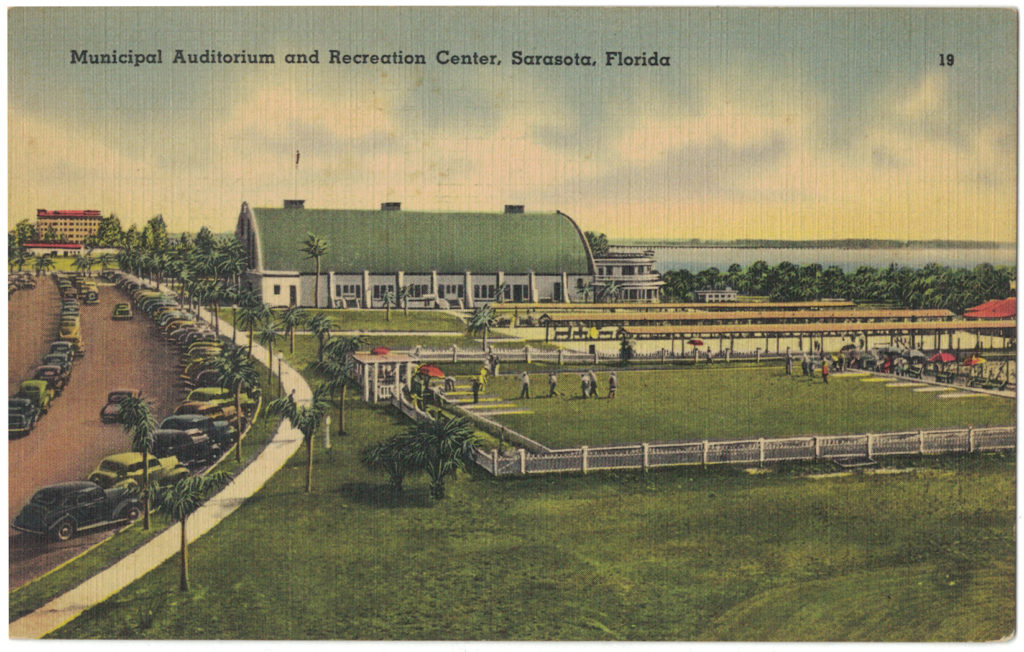 There are certain buildings in Sarasota that would truly devastate me forever to see gone. This is one of them. The Municipal Auditorium is likely a building that you’ve driven past hundreds, if not thousands, of times before if you live in Sarasota. Maybe you’ve been inside for a special event, like a wedding, fundraiser, or (my annual favorite) Atomic Holiday Bazaar. This half-barrel building on the bay is truly special and reminds me of a saying Andrea and I embrace: “It’s not good because it’s old, it’s old because it’s good.”

It’s important to start this by looking at what Sarasota was enduring before the Municipal Auditorium was ever conceived. The booming real estate years of the early 1920s came to a grinding halt at the end of 1926, and the stock market crash of 1929 that launched the Great Depression meant that many Sarasotans were out of work and out of luck. City leaders fought tirelessly to find ways to alleviate the economic struggles so many families were facing by pursuing federal funding through two Roosevelt-era programs: 1) Public Works Administration program (PWA), and 2) Works Projects Administration program (WPA). The PWA and the WPA worked in conjunction with one another; PWA was funding to construct public buildings, while the WPA was meant to employ people to build the buildings. 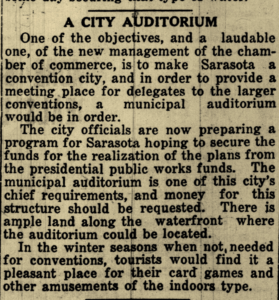 Mayor E.A. Smith is credited with dreaming up the Municipal Auditorium and Bayfront Park in 1935. The City of Sarasota had acquired the land during the Great Depression (thank goodness) by buying tax certificates of $15,000 which had been accrued by the property owners. To obtain the federal funding needed for the project, a substantial advance of $10,000 was needed. In March of 1937, prominent businessmen came together to advance the money for the City. The federal government then agreed to give $131,000 for the project in two grants and paid for the unskilled labor through WPA. To put that into perspective, that’s nearly $2 million in 2018 dollars. They broke ground in July 1937.

The Municipal Auditorium was designed by Thomas Reed Martin (who also designed the Roth Cigar Factory, the L.D. Reagin house, and the Colombia Restaurant in Tampa) and his son, Clarence A. Martin. I really love it’s Art Deco/Moderne design, which fits so beautifully with the surrounding landscape. 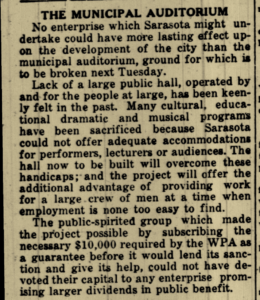 The Municipal Auditorium was completed just in time for the opening of the Sara de Soto celebration on February 24, 1938. To illustrate how necessary this project was for the City, more than 3,000 people attended that opening celebration. The only other large indoor space within the City at that time was the Mira Mar Auditorium, but this historian recalls that that space only sat 1,200. 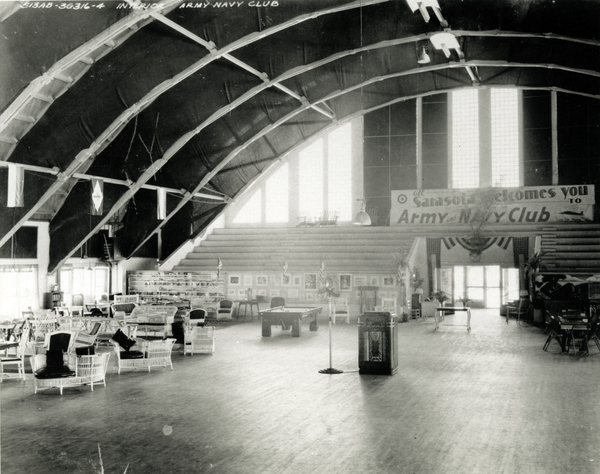 One particular aspect of the Municipal Auditorium that I feel is often overlooked (in my opinion, because the giant LED street sign is in the way) is the Hazzard Fountain. Donated by R.P. Hazzard, a shoe manufacturer from Maine, the fountain was designed by Thomas’ other son, Frank Martin at a cost of $8,000. The fountain has been moved several times, and for a brief period was located at the John and Mable Ringling Museum.

What I particularly love about the Municipal Auditorium is that is was, and always has been, a gathering place for the community. High School graduations have taken place here, the Sarasota Orchestra performed here for decades (until the Van Wezel was constructed in 1969), dances and events of all kinds. In this one building, people have made lifelong commitments to one another, political issues have been discussed, people have purchased wares from around the world, and donated what they could at fundraisers for many a great cause. To me, a place like that has not only many stories to tell, but can be the perfect setting for stories yet to come.