Jack of All Trades: The Many Careers of “Mr. Sarasota”, A.B. Edwards

It’s nearing graduation season and my niece is soon to be walking across the stage at Riverview High School, and off to join the ranks of college freshmen this Fall. It’s an exciting time, and she’s making her final choices on which university she will be attending. This time of year always has me thinking about college majors, and how rarely they intersect with actual long-term career pathways. Since graduating from college in 2013, I’ve had 5 different jobs – only two of which directly related to my degree. Most people I know are working in careers that don’t directly relate to their college major. And yet, we as a society idolize those that have a “single calling” – the people that knew from an early age what they wanted to do, pursued it ruthlessly, and did that one thing all their lives. We like to think of that as a success, and maybe to that person it is. But I call “horse hockey” (to quote Colonel Potter for all my fellow M*A*S*H fans out there) on that being the only perspective. 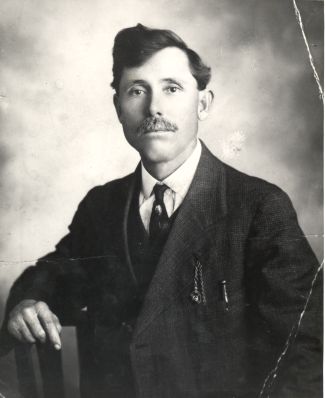 Take a true Sarasota native: Arthur Britton (A.B.) Edwards. You may remember reading a bit about him from Andrea’s recent post on the Great Floridian Plaques. One of seven children, A.B. Edwards was born in the northern area of Sarasota in 1874; in the neighborhood approximately where New College of Florida and USF Sarasota-Manatee currently stand. At 14, both his parents passed and he was left responsible for his three younger brothers. This led to his first job: picking and delivering oranges. He eventually found a job working cattle for pioneer-era ranchers, followed by a period in the Quartermasters Department of the United States Army where he was stationed in Cuba toward the end of the Spanish-American War. He returned to Sarasota after the war and married Fannie F. Lowe in 1900; granddaughter of Jesse Knight, founder of Horse and Chaise (now known as Nokomis).

This is where his resume gets really interesting. Edwards loved Sarasota and was remembered fondly for his many civic contributions when he died in 1969 at the age of 95. He was even referred to as “Mr. Sarasota” due to his passion for the community. Here are some highlights of his resumé (both paid and volunteer roles):

Owner, A.B Edwards Real Estate and Insurance Agent — Yep, A.B. opened the very first real estate and insurance office in Sarasota in 1903 (this was when the population was about 300 people in the area). From what I can tell, this was his first long-term job after returning from the war, and perhaps the role he held the longest. He advertised this business in the local newspaper frequently.

An advertisement for A.B. Edwards’ primary business from the Sarasota Times on May 17, 1917

First Elected Tax Assessor, City of Sarasota — Edwards was elected to this role in 1907 and served until 1913. Remember, this was when Sarasota was still a part of Manatee County. He returned to the job after he was appointed by Governor Cary A. Hardee to create the tax books and establish the first tax assessor’s office for Sarasota County in 1921-22. From what I can tell, the first go around as Tax Assessor is where he realized the needs of the Sarasota community were not be met by the Manatee County government.

Secretary and (later) President, Sarasota Chamber of Commerce — Edwards served as the first Secretary of the Board of Trade in 1911. The organization reorganized as the Chamber of Commerce in 1920, and Edwards served as the President between 1922 to 1924. It’s through the collective power of the Chamber that Edwards was able to push forward major projects and initiatives that shaped the history of Sarasota.

The First Mayor, City of Sarasota — This might be one of the things Edwards is most notably recognized for achieving. He was appointed in 1914 when the city was incorporated. He won the election with 108 votes (his opponent received 63). Two other mayors, Harry Higel and G.W. Franklin served terms in 1916-1919, but Edwards returned to this role in 1920. 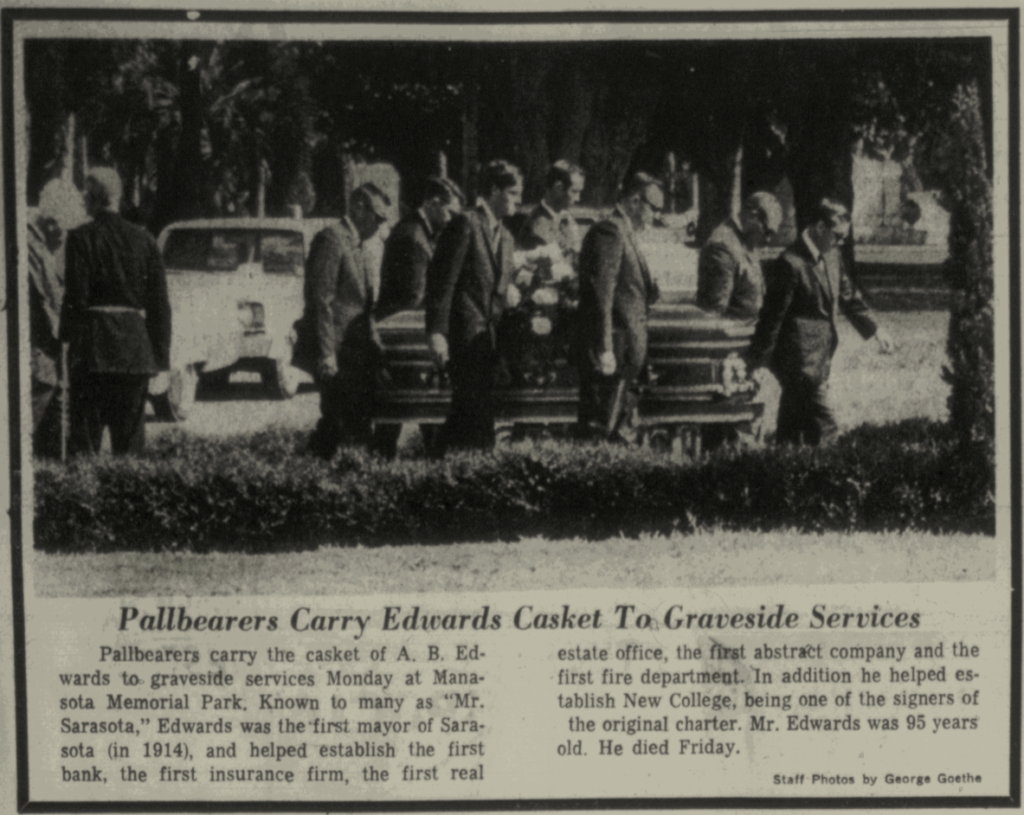 Edwards died at the age of 95 and received an outpouring of appreciation for his many years of civic support, as evidenced by this November 18, 1969 clipping from Sarasota Herald Tribune.

Edwards is credited with quite a bit of accomplishment throughout his lifetime, including:

An advertisement for the film, “Circus Rookies” at the Edwards Theatre | April 29, 1928, Sarasota Herald

So to all the soon-to-be graduates, take a page out of A.B. Edward’s resume. I think you’ll find success has a lot less to do with sticking to one road, and more about what you do along the journey. You’ve got plenty of time. Lead with your heart as much as your head. Congratulations, class of 2019.