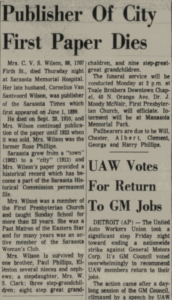 Fair warning, this is a DENSE blog post, but I think it is important for three reasons:

1) I love Rose Wilson and want people to know more about her.
2) It illustrates the dedication that Mimi and I give to our research. We look for multiple primary sources and pride ourselves in creating a full picture of that person’s life.
3) It provides a guide for others who want to conduct their own research.

It begins with Rose Wilson and my desire to uncover her family tree. (If you want to learn more about Rose check out this post.)

I found Rose’s obituary through a search on newspaperarchive.com.

In addition to when she died, her obituary has several important pieces of information: her husband was Cornelius Van Santvoord (C.V.S.) Wilson, at the time of her death she had a one living brother named Paul and a step-daughter named Mrs. W. S. Clark, and she is buried at Manasota Memorial Park.

A search on Google Books uncovered History of Florida: Past and Present, Historical and Biographical, Volume 3 by Harry Gardner Cutler from 1923.

This book had a short biography of C.V.S. Wilson which proved to be a gold mine of information! According to this book:

But, of course, now I have to verify all of that information!

Through this I discovered that at the time of his death in 1912, he had a wife, one daughter, and four sons. Rose had brothers! This is exciting, but now I have four more people to find.

With John’s death date I was easily able to find both John’s grave and Isabella’s grave on findagrave.com. They are both buried at Braden River Cemetery and she passed away in 1916.

Whew! I still had a lot of people to find if I was going to put together Rose’s entire family! I decided to start with her step-children.

In a newspaper search for C.V.S’s obituary, I stumbled across the obituary of Arthur Wilson! Remember that in 1923 C.V.S had five living children. Well, he also had a son named Arthur who passed away at the age of 15 in 1888. And thanks again to findagrave.com I was able to find Arthur’s grave at the Manatee Burying Ground. 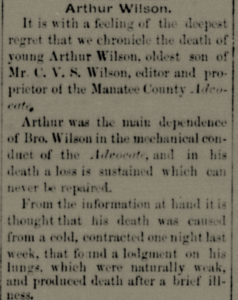 On his stone his mother is listed as Harriet, which led me to her grave which is also in the Manatee Burying Ground. The details were a bit different than those that were listed in the 1923 book. Her name on the stone is Harriet Angelia Wilson and her date of death is 1887.

I was easily able to piece together her remaining five step-children through obituaries and graves.

With Rose’s step-children discovered, I switched to the even more difficult task of identifying her four brothers.

My usual searches were not turning up anything. But I did have one more piece of information, Rose was born on Prince Edward Island. I ended up finding the 1881 Canadian Census records thanks to the Manatee County Libraries database, HeritageQuest! 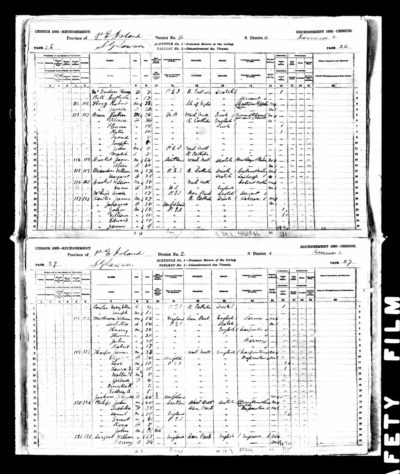 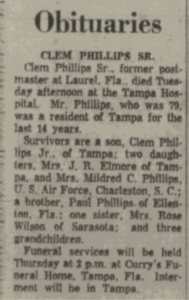 John (Clem)
December 16, 1880 – August 1960, Myrtle Hill Memorial Park
This one truly tested my sleuthing abilities. But the obituary and the age are correct in relation to the census. My best guess is that the census worker misheard them or wrote it down wrong. Census takers are people.

And there you have it! Rose Phillips Wilson’s family tree! 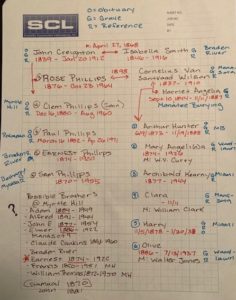