There’s no doubt that Sarasota has changed. Anyone that has lived here in the last 10 years has seen rapid growth and development, and I must say that there are parts of this town that feel like foreign lands compared to how they looked in my childhood. These changes intrigue me because I know that people remarked how different Sarasota was from their own childhoods when I was still a kid. The only constant is change, right?

When we were little, my mom would take us up Tamiami Trail just north of Ringling College (now, Ringling School of Art and Design) to the Twistee Treat. We had a lot of fun slurping our ice cream cones and playing on the little playground outside. It was cheap entertainment. Looking back, that time was the tail end of a really beautiful era for that stretch of Tamiami Trail. As Andrea’s blog post pointed out, there were some really great kitschy hotels and motels but there were also some fantastic old Florida tourist traps. 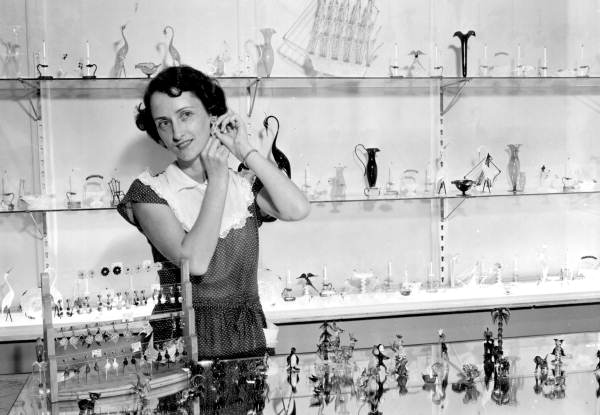 While researching my article on Barbara Bowers, I found this amazing photograph on Florida Memory titled “Mrs. Deakin showing blown glass earrings in the shop.” Adorable, right? I realized that there was also a color photograph of her in the same dress and that the photos were filed under “Deakin, John L., Mrs.”. I simply had to know more. 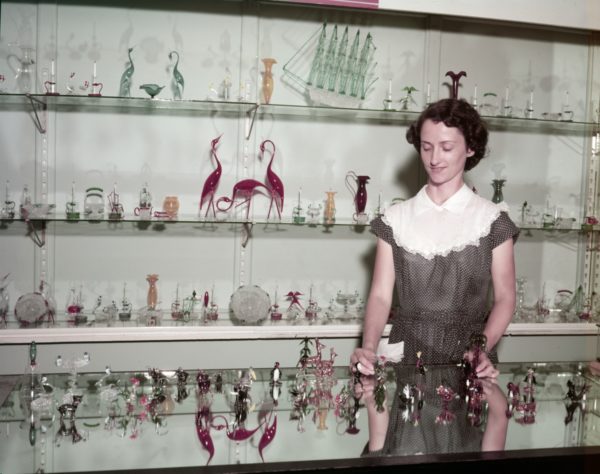 North Tamiami Trail, from the Ringling Museum to the edge of downtown, was considered a major tourist attraction area in the 1950s and 60s. Just south of University Parkway was The Glass Blowers — Mr. and Mrs. Deakin, starting in the 1940s, demonstrated their “bohemian lampworking” style of glass blowing to the public for free six days a week. Mr. Deakin had learned this style from his family and had taught the technique to his wife, which they then eventually taught to their son and daughter. Mrs. Deakin not only did glassblowing right alongside her husband, but she also was responsible for selling their wares of glass to tourists, who would pack into the tiny shop (sometimes shoulder to shoulder) to watch them manipulate balls of crystal glass into delicate cranes, alligators, and bud vases. Glassblowing is a very difficult skill and takes years of practice. Historically, women were not trained for this craft, and even today, few women pursue glass blowing professionally.

When I was researching Mrs. Deakin, it took me quite some time to find anything that had her first name. Most articles focused on her husband, John, and she was sort of in the background. If she was mentioned, the articles typically noted her attractive appearance. Somehow journalists completely overlooked how incredible and RARE it was to have a female glass blower in our community. She had her own fire bench right alongside her husband and really ran the shop when he later ran for public office.

Mr. and Mrs. Deakin passed in the early 1980s, and their daughter, Katherine, tried to keep the store going, but she refused to blow glass, and the tourists really weren’t interested in buying once they realized the attraction of watching the trinkets being made was gone. Katherine sold the building to a restaurant and the Glass Blowers sort of faded into the past. You can purchase pieces of their work on eBay or Etsy, and I am determined to someday have a piece of their work in my collection.